It is with joy and celebration on the occasion of the 125th Anniversary of Immanuel Lutheran Church, do we announce and invite you to celebrate with us. We would love to have you join us in praising God for all that He has done and is going to do at Immanuel! Our celebrations are planned around Covid restrictions, but we are hopeful that through this year, God will heal our land of this virus and we may have some more normalcy in our future events.

Saints Remembrance Service at 8:30 am

Take a walk through history...

Take a tour to remember saints from Immanuel’s past who helped shape our congregation in to what it is today and pay your respects to family and friends of our congregation. Tour guides will tell enticing stories and share some of our deep and interesting history. The ground is a little uneven, so please wear appropriate shoes. If you are uncomfortable walking through the cemetery, please come anyway and enjoy the fellowship! Donuts and drinks will be served with seating available under the shelter. You will receive a flower at church to place on the grave of a family member or friend you would like to honor on this special day. Flags will mark the graves of those who served in the armed forces.

1927 - Immanuel Lutheran School's float in Danville's Centennial parade. Pastor Berthold is standing at the driver's window with Al Dettman next to him in a paper hat. Arthur Seils, and ILS teacher, is below them wearing glasses. Notice the dirt roads, hard rubber tires, and the Elliott Lumber sign un the float!

A Group of men in front of the old church. The gentleman on the cart is grading the road.

Throughout the year, we will share memories from current or former members. If you would like to submit a memory, please email it to ilcd.churchsec@gmailcom or mail it to the church office. thank you!

In 1959, Kindergarten was optional and only half day. My parents were undecided as to whether I would go to Kindergarten until Pastor Bartz paid a personal visit to our home to say that I should attend at the new Educational Center on Bowman, and so it was! My Kindergarten class was taught by Zora Drews. My first grade was taught by Ruth Ranzenberger. We learned Spanish, which I still remember today. Teaching second grade was Frances Drews and third grade was Ruth Wendling (Roderick), who was also our cheerleading coach. Fourth grade was taught by Paul Puckett and 5th and 6th grade by Ted Meyer. He was the model to me in becoming a teacher. Clarence Goldenstern was my 7th and 8th grade teacher. He was also the principal, so we were sometimes left alone while he did principal duties. His office was attached to the classroom, so he could watch us through the window. There were 36 students in that classroom, in tank top desks. Mr. Goldenstern has a pretty good aim, so if you had the desk top up, talking behind it, a chalkboard eraser just might hit it. Our 8th grade examination and Confirmation took place on the stage in the gym before the new church was built.

The class of 1951 (5 girls, 4 boys) of Immanuel Lutheran School met in a basement room of the school in the morning for Confirmation instruction. Most classes were taught by Pastor Theodore Krause, assistant pastor to Pastor Berthold who would sometimes teach class. Before our Confirmation on March 18, 1951, we were given an oral examination before the congregation on Luther’s Small Catechism. We had to be able to recite the Ten Commandments, the three articles of the Apostle’s Creed, the Lord’s Prayer with the petitions, and Bible passages to support the questions we were asked. I slept with my Catechism under my pillow the night before hoping my brain would absorb the material while I was sleeping.

“I taught at Immanuel Lutheran School from 1951 to 1956 with Mr. Harms as my principal. There were about 42 students in 3rd, 4th, and 5th grades. Another teacher was added in my last year and then I only taught 3rd and 4th grades. I lived with the Wahlfeldts and did not have a car, so I walked to school each day. I would move back home to Elmwood Park in the summers and work at Petersen’s Ice Cream to earn money. I am still in contact with some of my students via Facebook. I met my husband, Albert Burmeister, while teaching at Immanuel.”

“One Sunday morning, shortly after my husband accepted the Call to Immanuel, I was talking to our oldest member, Millie Rick, after church. She had recently turned 98. I asked her how it felt to be that old. She said, “Fine, and I’m ready to go to heaven anytime. I just hope the good Lord isn’t in a hurry.” I love her comment and tell people about it when discussions turn to old age or dying. She made the best lemon cream pies!”

“This memory involves Howard Koehn who owned a Dodge dealership. He was on the building committee for the new church and we would travel to see churches that might inspire the committee. One evening on the road he was driving his Chrysler and I was in the front passenger seat. On chance, I glanced at him and saw that his eyes were closed, driving asleep! I nudged him and called out to awaken him. A tragedy was avoided!”

Pastor Ernest Berthold was “Uncle Ernest” to our family, as he was my grandmother’s brother, and so to all the family he was known as Uncle Ernest. He was a very loving and kind person, but also quite strict. Mom & Dad would pick up “Uncle Ernst” and Aunt Emily (Mrs. Berthold) on Sundays for an afternoon of togetherness or perhaps for a family baptism, as he handled all the family baptisms. Our plans were for Uncle Ernst to handle our wedding when Marion came home from the service, however that did not happen due to his accident on Fairchild Street. He was known all over Danville, especially the East end as he walked everywhere he wanted to go for parish visits, etc.

I will always remember Pastor Krueger. He was always there in many phases of my life, from Religion class, confirmation, he officiated my wedding and baptized my daughter. He had a good sense of humor and I felt that he led me to Christ. Pastor Heidle baptized my grand-daughter and son-in-law and also had a memorial for my husband. He is very caring, understanding, and a good listener. The church has been blessed with Pastor Callahan through these trying times. I enjoy his sermons very much. These three pastors have been a blessing in my life and will always remain in my heart.

One of my special memories involves the hundreds of beautiful white doves that were suspended in the sanctuary. The doves floated above us as we celebrated Pentecost. They were also inspirational as viewed from the balcony. They were left on display beyond the actual service they had been designed for because they were so striking.

We transferred to Immanuel from Trinity back in the 1960’s when our eldest child, Mark, was ready for Kindergarten. We had bought a house in Holiday Hills and so it made sense to transfer so he could walk to school. Our transition was eased along by the kindness of Shirley Kuhn who was a Sunday School teacher at that time. When we took out children to Sunday School she invited me to come to the Rebecca Circle meeting of the Women’s Guild. They held their meetings in the school cafeteria. There was only the school at the Bowman location at that time. Church services were still held on Fairchild Street where the original church and school were located. The Women’s Guild has several circles at that time and the Rebecca Group was for the young women. I believe the Altar Guild was another circle. The LWML met quarterly. Today it is one group. The school in those following years had close to 200 students at one time. If you belonged to the church, you did not have to pay tuition but were expected to pay for the school with your church donations. Many students lived in the Holiday Hills subdivision. At one point we started worship services in the gym of the school as well as the church on Fairchild Street. This involved a lot of extra work each week. The floor was covered with plastic mats and folding chairs had to be set up and taken down. The altar and the organ was on the stage. The bleachers were pulled out for extra seating.

When I started to attend Immanuel, church was in the gym. Later as an Immanuel Lutheran School student, we set up every Friday and took it down each Monday. I have great memories of our basketball team winning state and nationals my Junior year! 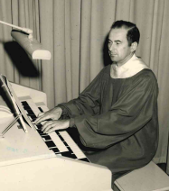 Theodore Meyer playing the organ for a church service in the gym. He was installed as the music director for the church and school. He and his wife, Genevieve, had 3 children: Lenore, Beth Ann, and Larry. 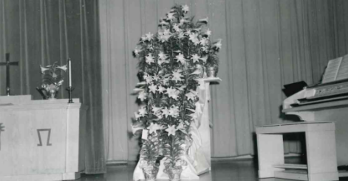 This is a picture of an Waster Sunday Worship Service when church was held in the gym. The altar, flowers, and organ are on the stage. 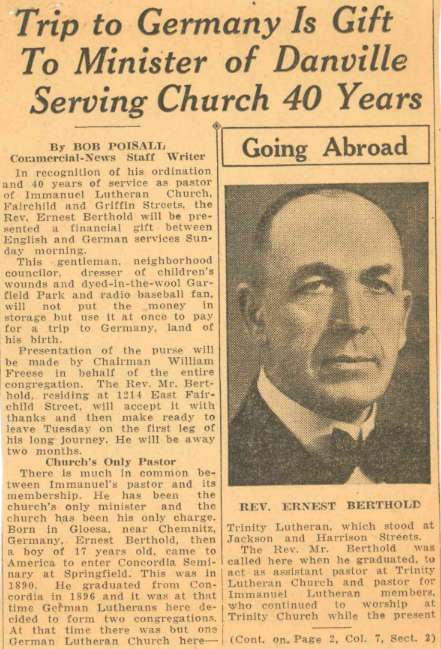 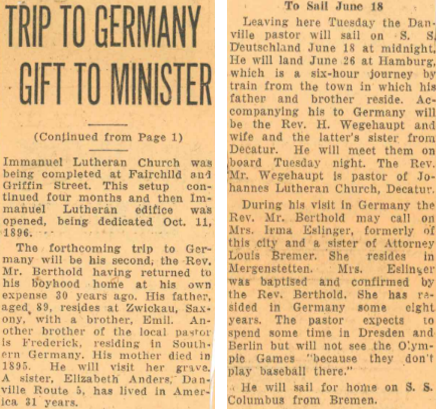